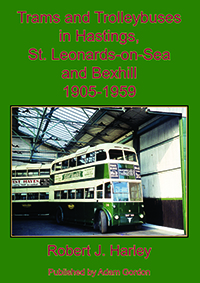 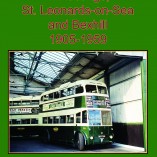 Trams and Trolleybuses in Hastings, St. Leonards-on-Sea and Bexhill 1905-1959

I grew up in suburban London. My grandparents moved out of the capital in 1950 and subsequently lived in East Sussex, where I was introduced to the beautiful scenery of the Weald and the South Downs. Their house on Battle Road, Hailsham, was the starting point for explorations of the surrounding countryside. No summer holiday was complete without several trips to the coast. The route 15 bus, a joint service operated by the Southdown and Maidstone & District companies, passed outside the front gate. It provided the means for 1950s family excursions to Hastings and Bexhill. These were always enlivened by the sight of the trolleybuses, which fascinated me. A particular delight was a summer ride from the centre of Bexhill to the terminus at Cooden Beach. After we had struggled aboard with the picnic, the swimming gear and the buckets and spades, we were off, skirting Egerton Park and then heading along Cooden Drive, straight as an arrow, with its seemingly endless vista of bracket arms holding up the overhead wires. In truth, the attractions of playing on the beach, building sand castles and paddling in the sea often failed to enthuse me as much as watching the infrequent arrivals of the trolleybuses. Of such childhood experiences are passions born.

There are no reviews yet.

Be the first to review “Trams and Trolleybuses in Hastings, St. Leonards-on-Sea and Bexhill 1905-1959” Cancel reply